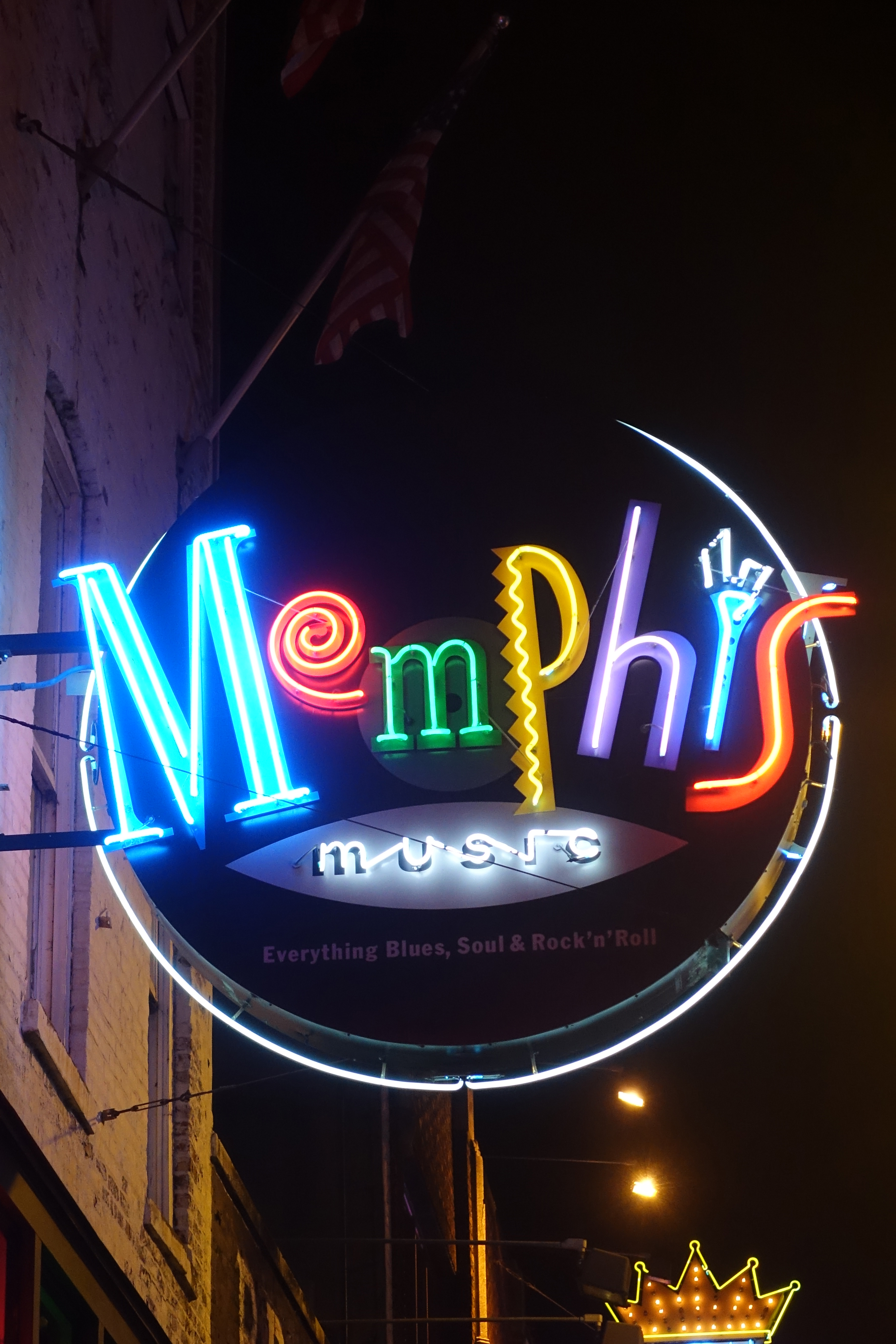 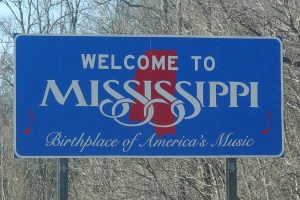 A road is a road, and sometimes you come to a crossroad. To the birthplace of today’s American popular music, jazz, rhythm and blues, rock and roll, soul, and hip hop. But it is “The Blues,” the granddaddy of them all that you will experience. Early forms of the blues evolved in and around the Mississippi Delta in the late 19th and early 20th centuries. A fan of the blues need only travel to Memphis, Tennessee, to the world famous Beale Street and south to the beginnings of Delta Blues Music to “Ground Zero,” the Cross Roads, Clarksdale, Mississippi. It’s where U.S. Highway Route 61 intersects with Route 49. It’s also where Robert Johnson sold his soul to the devil to achieve musical success. Johnson is credited with being the first American blues singer-songwriter and musician.

Some say the blues was born because of Robert Johnson, who died at the age of 27, and maybe the official founder of the famous “27 club” to be joined years later by the likes of Brian Jones, Jimi Hendrix, Janis Joplin, Jim Morrison and Kurt Cobain. Amazingly, Johnson had only eleven 78-rpm recordings from 1936 to 1937 in San Antonio, Texas, after which the Devil collected his due in 1938. His recordings left behind a brand of singing, guitar skills, and songwriting that influence generations of musicians and genres to this day. 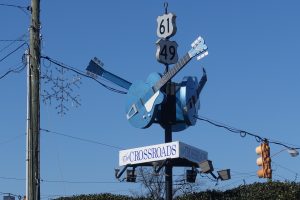 To truly explore into the blues genre, one need only travel the old Blues Highway—Route 61 between Memphis and Clarksdale. You will find music everywhere you turn. Blues, soul, gospel, and R&B spill out of car windows, juke joints, cafes, church doors and on street corners. Blues greats such as Muddy Waters, John Lee Hooker, Bessie Smith and B.B. King rode the Blues Highway. Elvis, born in nearby Tupelo, Mississippi knew it as well. His rock-and-roll is as rooted in the delta as they say in Mississippi, “like a cypress tree in the lowland muck” or “like a boll weevil on a bud of cotton.”

We set off on our “blues journey” at the beginning of it all, “The Crossroads,” in Clarksdale, Mississippi, on the banks of the Sunflower River in the heart of the Mississippi Delta. A history lesson in “The Blues” is about to unfold. Our first stop is at that famous intersection. After all, one needs to see where is all began. As you start to hear “Cross Roads Blues” in your mind you can actually feel the devils optimistic leers as he sizes up any new takers.

Pictures of the trio of electric guitars on a pole smack in the middle of the intersection are a must before you venture to all of the amazing historic sites. Next stop is the Clarksdale’s Riverside Hotel where Bessie Smith died following an auto accident on Highway 61 while heading to a performance at The Cat Head Delta Blues & Folk Art Gallery, a record store, art gallery and souvenir stand that promotes the Clarksdale Delta Blues history. 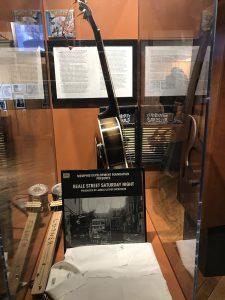 Another must stop is The Delta Blues Museum, Mississippi’s oldest music museum. It was established in 1979 by the Carnegie Public Library Board of Trustees housed in the historic Clarksdale freight depot, built in 1918 for the Yazoo and Mississippi Valley Railroad. With exhibits honoring Johnny Winter (born in Mississippi but raised in Beaumont, Texas), Charlie Musselwhite (Memphis Charlie), “The King of the Boogie” – the one, the only and Clarksdale’s own, John Lee Hooker, McKinley “Muddy Waters” Morganfield, Sam Cooke and present day musician and artists, Luther and Cody Dickenson of the North Mississippi All Stars, and their father, James Dickinson, a well renowned American record producer, pianist, and singer who fronted the Memphis, Tennessee-based band Mud Boy and the Neutrons, among others. The museum also hosts and promotes numerous festivals, such as the Juke Joint Festival (April 20 – 23, 2017), The Mississippi Saxophone Festival (May 27, 2017), The Sunflower Blues Festival (Aug 11 – 13, 2017) and the Mississippi Delta Blues and Heritage Festival.

Heading north out of Clarksdale, on Highway 61 you well come upon Tunica, Mississippi that contains another “must stop for all music lovers.” The Gateway to the Blues Museum and Visitor Center, a rustic train depot circa 1895, that tells the remarkable story of how the Blues was born and the role Tunica played in building the genre’s legacy with a one-of-a-kind souvenir and gift store.

By now, needing some southern nourishment to add to your “blues” experience you will certainly need to make a stop at the award winning family style restaurant, The Blue and White Cafe and Service Station in Tunica. Absolutely, a fantastic digression. Since 1924, The Blue and White has operated successfully during the terms of over a dozen U.S. Presidents and throughout many other economic and domestic changes in both Tunica and the United States. In the kitchen you will find a grandmother cooking side by side with her daughter-in-law and two of her grandchildren as she passes down a seventy-year-old tradition of true Southern style cooking with true Southern hospitality. With award winning steaks, fried chicken, pork chops, shrimp “po-boy” sandwiches joined with sides like fried okra or fried pickle chips, all Delta specialties. After finishing with a beautiful slice of homemade pecan or coconut pie it’s time to get to Memphis.

Within the hour you should find yourself in the heart of downtown Memphis, the Beale Street Entertainment District, a melting pot of delta blues, jazz, rock ‘n’ roll, R&B and gospel. This National Historic Landmark was declared the Home of the Blues by an act of Congress and with its rich history of legendary performers gracing the district, it is not hard to see why. From the 1920s to the 1940s, Louis Armstrong, Muddy Waters, Albert King, Memphis Minnie, B. B. King, Rufus Thomas, Rosco Gordon and other blues and jazz legends played on Beale Street and helped develop the style known as “Memphis Blues.” As a young man, B. B. King was billed as “the Beale Street Blues Boy.” A stroll down Beale Street’s “neon row” you will hear musicians performing their art during jam sessions at many of the clubs go deep into the night. Clubs like Rum Boogie Café, B.B. King’s Blues Club, Silky O’Sullivan’s, The Tin Roof, Jerry Lee Lewis’ Café & Honky Tonk or the Hard Rock Café. All serious about the blues.

Other attractions in Memphis include Elvis’ Graceland, billed as the Ultimate Rock ‘n’ Roll Destination where you can explore Elvis Presley’s home, Graceland Mansion. You will be immersed into Elvis’ life and career learning of his roots, influences and his artistry. In addition to visiting the Mansion you can also experience The Entertainer Career Museum, The Presley Motors Automobile Museum, The Elvis Airplanes, The Private Presley Exhibit, The Archives Experience and The Elvis Fashion Exhibit.

To make your Elvis and “Memphis Music” experience complete you will surely need to visit Sun Records Recording Studio where in August 1953 Elvis walked in to pay for a few minutes of studio time to record a “two-sided acetate disc” to include the songs, My Happiness and That’s When Your Heartaches Begin. On our Sun visit the history of The Sun Sound was presented to us by none other than the passionate, Lahna Deering, a musician in her own right and a member of the independent local Memphis band Deering & Down, described by critics as “having a defiantly unorthodox style with a Smokey Memphis flavor.” Lahna imparted upon us the history of Sun Records from its beginning when Sam Phillips launched Sun in 1952 recording Memphis’ diverse musical scene: gospel, blues, hillbilly, country, boogie, and western swing, to 1954 when Elvis stepped in the door and later attracted contemporaries Johnny Cash, Jerry Lee Lewis, and the “Rockin’ Guitar Man”, Carl Perkins. These four soon became known as the Million Dollar Quartet. Right behind them came Roy Orbison, Charlie Rich, Bill Justis, Harold Jenkins (a.k.a. Conway Twitty) and other equally memorable musical talents. During our visit, we were able to stand in the same room as the great Rock ‘n’ Roll fathers of our life time, hold their instruments and equipment and feel the sensation of the creativity that exudes the walls of the studio. Thank you Lahna for my favorite experience in Memphis.

In addition to Sun Records, we also visited The Stax Museum of American Soul Music (the “true birthplace of soul music”) that recorded such talents as Otis Redding, the Staple Singers, Isaac Hayes, Rufus and Carla Thomas, Booker T. & the MGs (an interracial instrumental quartet that also served as the company’s rhythm section), Sam and Dave, Johnnie Taylor and Albert King. The museum’s collection includes more than 2,000 exhibits, videos, stage costumes, photographs and instruments used to record “the Stax sound.” As part of these exhibits you can stand in a real, circa-1906 Mississippi Delta church that has been carefully reassembled inside of the building, Isaac Hayes’ glittering custom Cadillac Eldorado and his Oscar trophy (for Theme of Shaft, Best Original Song) and Studio A, an exact replica of the legendary converted movie theater where Stax artists cut records, down to the gently slanted floor that contributed to Stax’s special sound.

If you think you had enough of “music museums” The Memphis Rock ‘n’ Soul Museum needs to be on your list. The museum tells the complete story of Memphis music history, of the musical pioneers and legends of all racial and socio-economic backgrounds who, for the love of music created “the musical sound that changed the world.” And last on our list is the Blues Hall of Fame Museum that exhibits, exposes and educates a visitor about the in-depth history of all that is blues culture while highlighting over 400 inductees in five key categories: Performer, Individual, Album, Single, and Literature.

No trip to Memphis is complete until you visit one of the nation’s premier heritage and cultural museums, the National Civil Rights Museum which is steadfast in its mission to share the culture and lessons from chronicles key episodes of the American Civil Rights Movement and is located at the Lorraine Motel, the assassination site of Dr. Martin Luther King Jr.

Of course, your visit to the Home of American Blues Music and Rock & Roll is not complete until you visit the Peabody Hotel that dates back to 1869. Its history includes the 1933 placement of ducks in the hotel’s lobby fountain, setting in motion a 90-year tradition that continues today with the March of the world famous Peabody Ducks. It is said that Elvis signed his first RCA contract in the lobby and Lansky Brothers, “the clothier to the King” is situated just off the lobby. 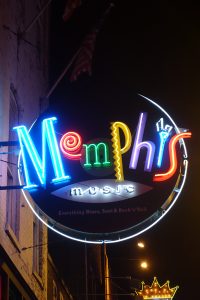 Lastly, the Gibson Guitar Factory where you are able to tour the factory and experience the behind-the-scenes look into making one of the highest quality guitar brands in the world. You will get a glimpse at the production process that includes the many stages of building a guitar, from binding to buffing and painting.

Starting a journey at a crossroad, particularly at the foot of the Blues Delta is an incredible experience for any fan of American Music. However, to appreciate a complete understanding of America’s musical heritage one needs to see, hear, feel, taste and touch it for themselves.

Keep on the lookout for more Appearing Live Tonight.