An Evening Of Respect: Celebrating Otis Redding 50 Years of “(Sittin’ On) The Dock Of The Bay” 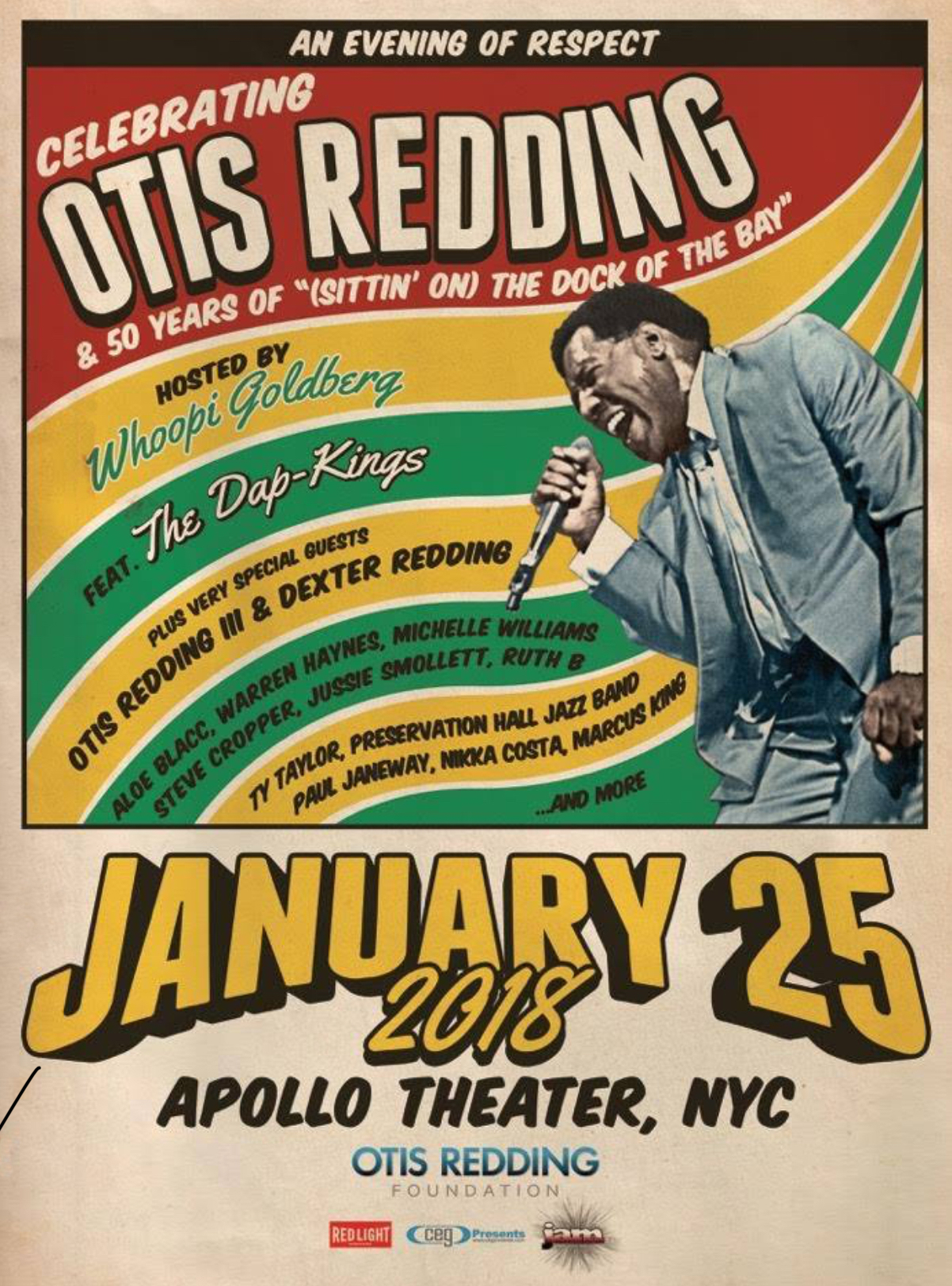 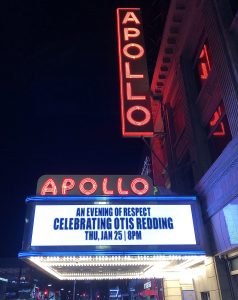 This year marked the 50th Anniversary of Otis Redding’s “(Sittin’ On) The Dock Of The Bay”.  A very special anniversary tribute was celebrated by The Redding Family in New York City, at no better place for this event than the legendary and historic, Apollo Theater in Harlem where Otis performed five times in his short celebrated music career. The evening’s events were to be hosted by Whoopi Goldberg who was unable to attend due to a sudden bout of the flu. However, the sold out, standing room only audience was welcomed by Karla Redding, the daughter of Otis and Zelma Redding and Executive Director of the Otis Redding Foundation.  Karla proudly and graciously informed us that The Otis Redding Foundation educates children in music and the arts while maintaining Otis’ legacy and dreams. Pursuant to its web site, The Otis Redding Foundation’s mission is to empower, enrich and motivate youth through education in music.  With its roots in music, the foundation has created educational awareness programs in the arts and humanities. These programs encourage individual and team participation, build self-esteem and instill discipline. To honor Otis’ dream, the Otis Redding Foundation provides opportunities for youth to improve their academic performance by helping them make choices in life that enrich rather than endanger.  Each partnership and program sponsored since its inception in 2007 supports the philanthropic commitment of Otis Redding to empower and enlighten all young people to fulfill their dreams.  Amazingly, (Sittin’ On) The Dock Of The Bay what was to become Redding’s most famous song, was recorded just days before his untimely death and released within a few weeks thereafter on January 8, 1968.  It received two Grammy® Awards in 1969, for Best R&B Song and Best R&B Vocal Performance.  The record reached number one on the Billboard Hot 100 and Hot Rhythm & Blues Singles charts concurrently, and became the first posthumous number-one single in U.S. chart history. Only a handful of performers have reached No. 1 with a single after their deaths, including John Lennon, Janis Joplin and the Notorious B.I.G. 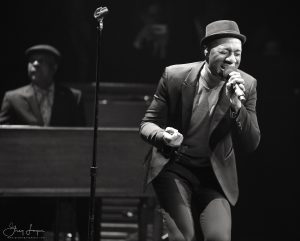 It has gone triple platinum and been covered by artists from Cher to Bob Dylan. Rolling Stone named it No. 26 on its 500 Greatest Songs of All Time.  In addition, (Sittin’ On) The Dock Of The Bay is the #6 most played song on American radio and television for the 20th century, with over 10 million broadcast performances. The song also has over 100 million streams on Spotify alone, averaging 650,000 streams a week. Immediately after Karla Redding’s welcoming introduction, the music of the evening started when the Preservation Hall Jazz Band marched from the rear of the theater to the stage while playing a traditional New Orleans jazz number.  Once on stage, the band broke out into a soulful Amen and This Little Light of Mine.   The house band for the evening was The Dap Kings known for its funk and soul music while with the late Sharon Jones.  After the Dap Kings where set, Otis Redding III lead off with Knock On Wood , an Eddie Floyd and Steve Cropper hit, first covered by Otis Redding.  The house started heating up when Mark Lockett joined the stage for That’s How Strong My Love Is, a song covered by Otis Redding that reached no.18 on the Billboard R&B chart and no.74 on the US pop chart.  Dexter Redding was then introduced and performed a rendition of Shake that took the audience out of their seats and dancing in the aisles.  Australian-American funk, soul, and blues singer Nikka Costa, then came out to perform, Nobody’s Fault But Mine. One of highlights of the evening was Paul Janeway‘s powerful renditions of Down In The Valley and I’ve Been Loving You Too Long. Janeway, best known as the front man of St. Paul & The Broken Bones, soulful voice and stage presence along with his singing on his back from the stage floor had this audience on its feet.  If Janeway’s performance didn’t move you then it had to be Otis Redding’s 1964 recording of These Arms of Mine performed by Ty Taylor, lead singer of Los Angeles based Soul/Rock band Vintage Trouble. 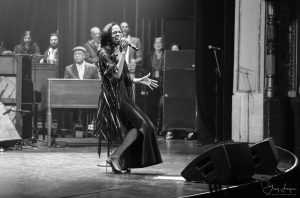 The ever so versatile Warren Haynes joined the Dap Kings on Hard to Handle that contained a classic Haynes guitar solo accompanied by the Dap Kings horn section.  Haynes then brought out his friend the young and upcoming artist, Marcus King. The two performed Satisfaction, trading vocals, and guitar licks while Booker T. Jones sat in on the organ.  Interestingly, Otis Redding’s cover of the Rolling Stone’s Satisfaction was arranged by Booker T & the M.G.s’ guitarist, Steve Cropper.  Redding became the first black artist to have a hit with a song by a “British Invasion” group. Never ceasing to entertain, Warren and Marcus then went into Otis Redding’s 1967 hit I Can’t Turn You Loose where Warren and Marcus again traded soulful guitar licks, to the funky rhythm beats of the Dap Kings. Giving the Dap Kings a short rest, Preservation Hall, with the young soulful and angelic singer, Ruth B., performed Pain in My Heart after which The Dap Kings where welcomed back to the stage and brought back Ruth B. to sing My Girl, made famous by the Temptations and covered by Otis Redding. 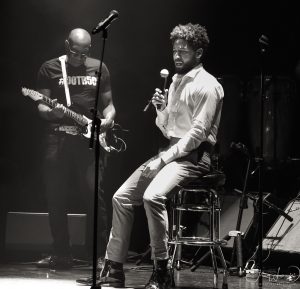 Otis Redding III and his brother, Dexter kept the crowd dancing in the aisles with The Happy Song, another hit released posthumously and from the album entitled The Immortal Otis Redding. From Otis Redding’s The Soul Album, and with Otis Redding III on guitar, actor, singer and photographer, Jussie Smollett, best known for his portrayal of musician, Jamal Lyon in the Fox music-industry primetime TV drama, Empire, performed a sit down rendition of Cigarette’s and Coffee that had all the women in the audience fanning themselves. A tribute honoring the music of Otis Redding just wouldn’t be complete without the appearances of Booker T. Jones and Steve Cropper, founding members of Booker T. and the M. G.’s the house band of Stax Records, that played on hundreds of recordings by artists such as Wilson Pickett, Bill Withers and Sam & Dave and of course Otis Redding, just to name a few. The smiling Booker T. walked out to a standing ovation and was followed by Steve Cropper to yet another standing ovation.  The two, along with the Dap Kings performed the ever so popular Green Onions and Hip Hug Her. 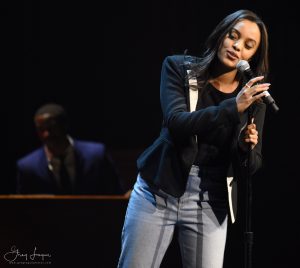 While Cropper and Jones remained on stage, Grammy Award winner and Billboard’s fifth ranked Top Gospel Artist of 2002, Michelle Williams of Destiny’s Child fame brought the house down with a very emotional, A Change Is Gonna Come.  Michelle also performed that same evening across town with Robert Randolph & The Family Band at The Brooklyn Bowl.  Just when you thought it couldn’t get any better, Otis Redding III came out and told us a story aabout whenhis mother, while Otis was on the road, wrote a poem and when she gave the poem to Otis he told her that she didn’t know anything about writing songs.  After his death, Dreams To Remember was released.  With Booker T. and The MG’s playing ever so slightly in the background that accompanied the recording, the song may be one of the finest recordings Otis is known for. On this night, the song was performed by the remarkably talented Aloe Blacc. Following was 12 time Grammy-nominated vocal powerhouse, Ledisi who performed a quivering and Apollo moving rendition of Respect, a song written and originally released by Otis Redding in 1965 and later, in 1967, was a hit and signature song for Aretha Franklin. The Redding Brothers, then returned to the stage with Aloe Blacc and performed a foot stomping, Try a Little Tenderness, a song originally written in 1932, and was recorded by Otis Redding in 1966. During its recording, Redding was backed again by Booker T. & the M.G.’s, and Stax staff producer, Isaac Hayes worked on the arrangement. 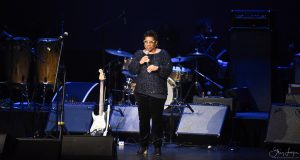 To bring the night to a close many of the evening’s artists came back out and performed the one song we were there to celebrate, (Sittin’ On) The Dock Of The Bay. It was truly an amazing evening of Respect when during the finale we witnessed the Redding siblings, Aloe Blacc, Marcus King, Michelle Williams, Ty Taylor and Jussie Smollett singing the words while The Dap Kings, Booker T. and Steve Cropper and The Preservation Hall Jazz Band play along to what has become a “Redding Anthem.” Experiencing the evening’s artists, young and old, from many different corners of the music industry appear and perform the songs of Otis Redding was a testament to just how great an artist Otis Redding was.   When the evening ended and as we walked up the aisle to the exits, one was left realizing the contributions to music made by a man who left us at the early age of 26 years old; a Rock & Roll Hall of Famer and recipient of a Grammy Life Time Achievement Award; his contribution to American soul music; and why Rolling Stone Magazine ranked him number 21 of the “100 Greatest Artists of All Time” and eighth on their list of the “100 Greatest Singers of All Time.  Clearly, the testament and legacy of soul legend, Otis Redding lives on through not only his music but also by the foundation that bears his name. 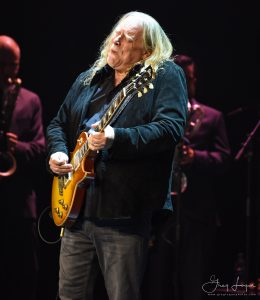 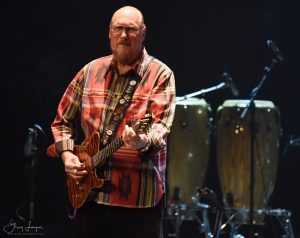 Keep on the lookout for more Appearing Live Tonight and remember, support live music and enjoy your “NIGHTLIFE.” By Frank J. Lombardo

THE STANTON ANDERSON BAND: FIVE DECADES AND THEY...